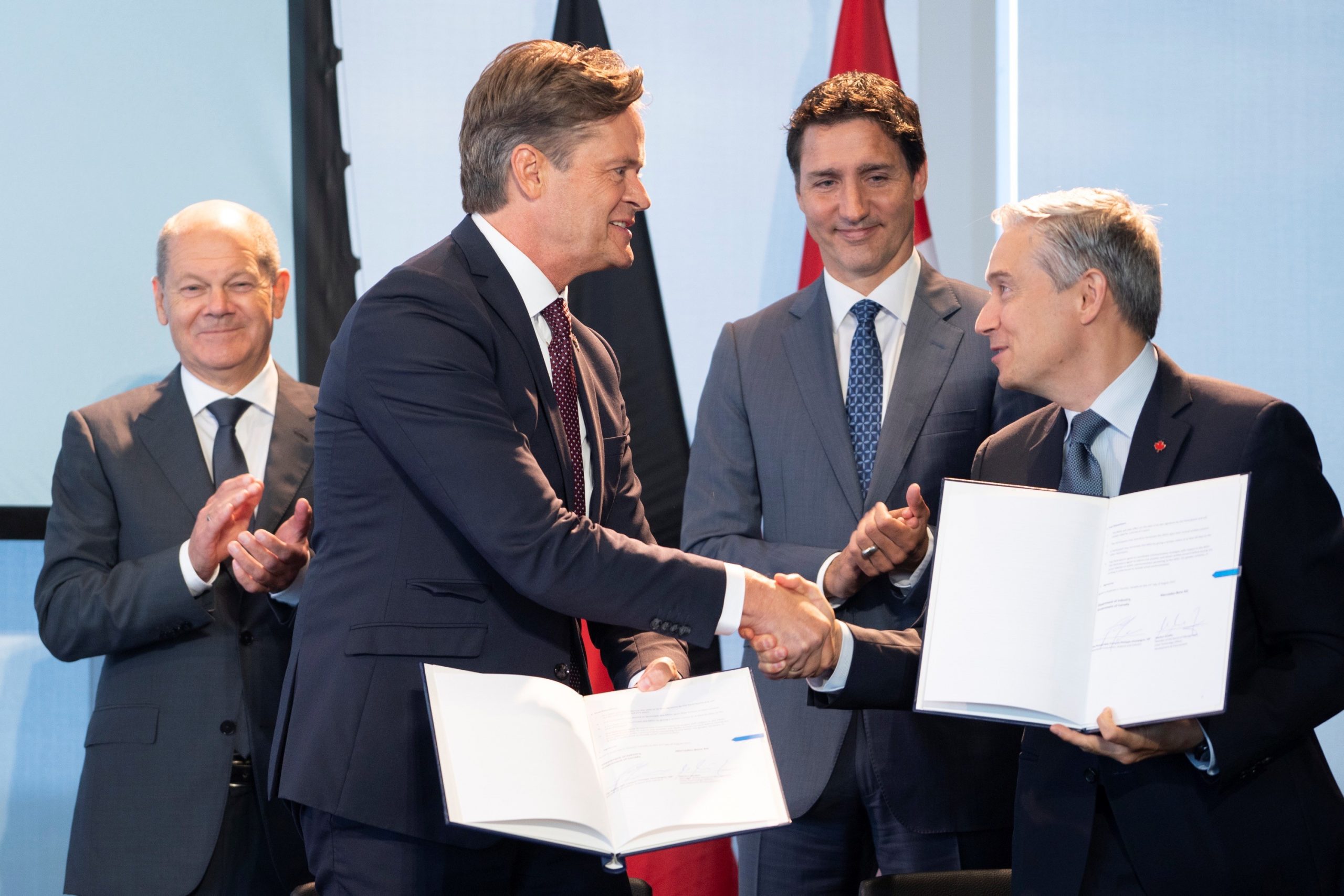 By: Eileen R. Coughlin
In: Canadian government
This week, Mercedes-Benz Group AG and Volkswagen Group AG each signed a memorandum of understanding (MOU) with the Government of Canada that includes provisions for, among other things, the extraction of raw materials, such as lithium, for the use in the production of batteries for electric vehicles.

The signings of the memorandum of understanding, which took place in downtown Toronto in the presence of Prime Minister Justin Trudeau and German Chancellor Olaf Scholz, are designed not only to meet the growing demand for batteries for the rapidly expanding list of electric vehicles from both companies, but to do so in environmentally friendly ways.

The agreement also calls for deeper supply chain cooperation, including “production, life and recycling,” according to a press release from Mercedes-Benz Canada. No details were provided.

With the rapid industry-wide shift from internal combustion engines to electric propulsion, time is running out when it comes to sustainable raw material sourcing. Mercedes intends to have its fleet fully electrified by the end of this decade.

To underscore this point, earlier this year the company opened a battery plant in Tuscaloosa, Alabama, where it will build two pure electric vehicles, the EQE SUV and EQS SUV. Mercedes has also signed an agreement with Stellantis NV to build eight global battery factories.

To that end, Mercedes has reached an agreement with Rock Tech Lithium, a Canadian-German cleantech company that will deliver up to 10,000 tons of lithium hydroxide to the luxury automaker starting in 2026. Rock Tech, which has a Canadian office in Vancouver, operates a lithium mine in northern Ontario near Thunder Bay. Refining will take place in Germany, according to Rock Tech, where the company is building a converter that will come online in late 2024.

Rock Tech is expected to become a bigger player in the lithium supply business in the coming years. According to its website, it plans to increase production to 24,000 tons per year by 2025, with a fivefold increase by 2030. Fifty percent of its raw materials are expected to come from recycled sources by 2030.

Volkswagen’s agreement with the Canadian government involves plans to “explore opportunities for Canada to contribute to Volkswagen’s global and regional battery supply chains,” the company said in a statement. PowerCo SE, an in-house battery subsidiary recently created by Volkswagen, will play a key role in this regard.

Volkswagen says PowerCo will establish a dedicated liaison office in Canada. It will focus on the supply of raw materials, including lithium, nickel and cobalt. PowerCo is expected to build a battery plant in North America and potential production sites are being evaluated. No further details were provided, but given that Volkswagen builds the ID.4 SUV in Chattanooga, Tennessee, a battery plant in that vicinity would make sense.

Like Mercedes, Volkswagen has big electrification plans for the rest of the decade. Across the group, the company plans to sell more than 25 electric vehicles in North America by 2030.

“As a car manufacturer, we consider compliance with strict sustainability criteria to be a top priority. For us, the availability of energy from renewable sources and a raw materials sector with mines supplying materials that comply with globally recognized environmental and social standards are of crucial importance. This is why Canada is an ideal partner for our battery and electric mobility strategy,” said Thomas Schmall, Volkswagen Group Board of Directors for Technology in a statement.