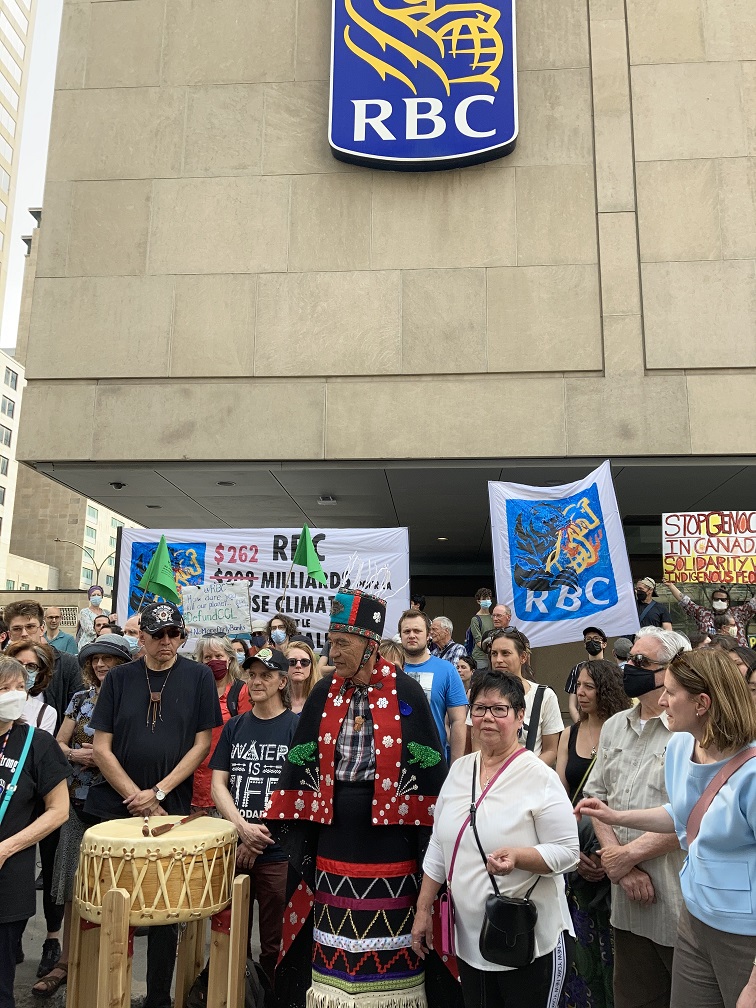 The Wet’suwet’en Nation’s fight against the Coastal GasLink pipeline project unfolded in Montreal on Thursday, with dozens of protesters gathering outside the headquarters of the Royal Bank of Canada (RBC).

The Wet’suwet’en are protesting RBC’s involvement in the gas pipeline project that will cross Wet’suwet’en ancestral territory in northern British Columbia.

Hereditary Chief Na’moks of the Wet’suwet’en Nation demanded respect for the rights of his people on his territory.

The demonstration took place in peace at the end of the afternoon, under the surveillance of the police.

According to the hereditary chief, it is not the power of money nor the power of the elect that will open the future but people with strong hearts who are brave and courageous!

Hereditary Chief Na’moks explains that his people will never use violence as a means of action and protest.

The most frequently employed and most effective means of maintaining power and supremacy over the Wet’suwt’en nation is the violence of money, of imposing one’s will on others, of usurping power, property and even life of others. Often the perpetrator believes he is doing the right thing, but he is destroying the lives of others.

It comes at a pivotal moment in the Nation’s fight against Coastal GasLink, as the United Nations (UN) recently condemned the continuation of work without the First Nation’s agreement and the escalation of the crackdown. policewoman.

To date, the Canadian government is ignoring condemnations from a United Nations human rights committee calling for a halt to construction of the Trans Mountain and Coastal GasLink pipelines.

The United Nations Committee on the Elimination of Racial Discrimination (CERD) “deeply regrets and is concerned” that Canada continues to forcibly evict Indigenous land defenders from their unceded territory, says the letter dated April 29, 2022.

The letter points to the governments of Canada and British Columbia, saying they “have intensified their use of force, surveillance and criminalization of land defenders and peaceful protesters to intimidate, evict and forcibly evict nations Secwepemc and Wet’suwet’en from their traditional lands, including by the Royal Canadian Mounted Police (RCMP), the Community-Industry Response Group (CIRG), and private security companies.