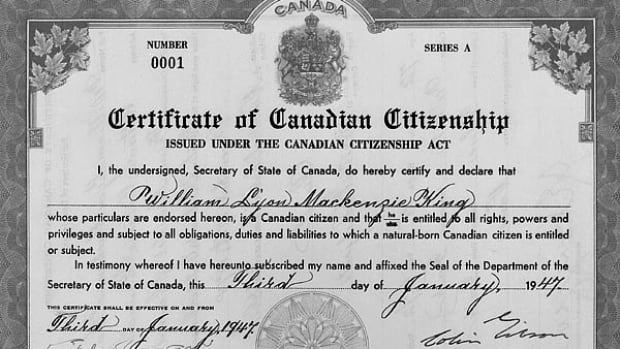 “I speak as a citizen of Canada.”

Until the Canadian Citizenship Act came into effect on January 1 of that year, Canadians were British subjects who lived in Canada. Now they were Canadian citizens, on paper. (Aspects of the 1947 law have since been challenged over the decades. The Canadian government overhauled the law in 1977. Further revisions followed.)

King was addressing officials at the ceremony, including the bill’s promoter, Paul Martin (the father of the future prime minister).

“Without citizenship, many other things have no meaning”

Along with 25 other recipients, he noted that his fellow new citizens come from widely dispersed communities across Canada and from countries around the world.

Just two years after the end of the Second World War, he referred to the contribution of the “sons and daughters” of Canada to that war and to the First World War.

“In global affairs, our country has an exceptional record of accountability and integrity,” he said.