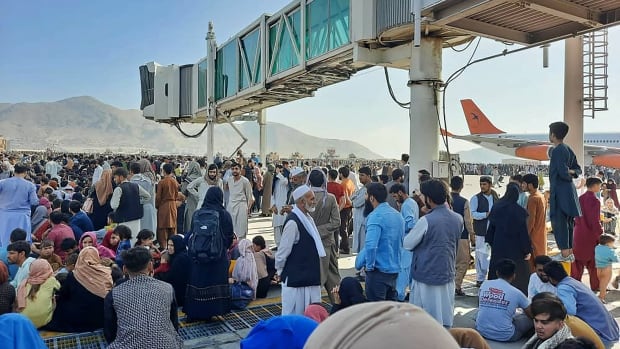 A Toronto man says he feels “abandoned” by Global Affairs Canada as he tries to flee Afghanistan after members of the Taliban showed up at his family home in Kabul.

CBC News has agreed not to reveal the identity of the man, who is self-employed in Canada, out of concern for his safety.

The Canadian citizen said he traveled to Europe with his wife and four children, but his trip was cut short when he had to return to Kabul on August 3 to be with his sick mother. His wife and children are still in Europe.

“I’m at a risk, a big risk. At any moment, something can happen,” he told CBC News on Tuesday in a WhatsApp call.

Last Sunday, he heard that Taliban fighters were entering Kabul. He said he rushed to the airport. But he couldn’t catch a flight.

The rush to leave thousands of foreign nationals and many Afghans began after the Taliban regained control of the country from the Afghan government, capturing all major cities, including the capital on Sunday, ending two decades of war with the United States, Canada and other Western allies. Many Afghans who worked with foreigners fear that the Taliban will imprison or kill them as collaborators. They also fear for the safety of their families.

Speaking on Tuesday, Liberal Leader Justin Trudeau said Canada had “no plan” to recognize the Taliban regime as the legitimate government in Afghanistan. Trudeau also said the federal government continues to focus on getting Afghans who work for the Canadian military and federal agencies safely out of the country.

But the man said he had to ask US troops at the airport if they could airlift him. He said they told him they only accept US passport holders. He said he had also contacted the Pakistani consulate seeking refuge, but had yet to receive a response.

On Monday, hundreds of people ran alongside a US Air Force plane as it moved down a runway at Kabul International Airport. US officials say at least seven people are believed to have died as they tried to cling to the plane as it took off.

WATCH | Desperate Afghans flock to the airport in an attempt to flee the country:

Desperate Afghans flock to Kabul airport in attempt to flee

As the Taliban tighten their grip on Afghanistan, desperate people have flocked to Kabul airport as a last resort in an attempt to board westbound planes. 2:21

The Toronto man told CBC News he ended up sleeping between the runway and the taxiway at Kabul airport on Sunday night.

“I spent the whole night without water, without food, without anything,” he said. “To my left were the Taliban. I was stuck with hundreds of people there.”

The man said he had asked to speak to a superior, but the operator said they were busy with another call.

“Technically, I am dropped by Global Affairs Canada,” he said.

In an emailed statement to CBC News, Global Affairs wrote: “Canada is aware of Canadians seeking to return home. We are working in close coordination with our allies on the ground to ensure their safe exit. We continue to monitor developments. .”

The department added that Ottawa takes “very seriously the safety and security of Canadians abroad.”

On Monday, the man went to his mother’s house where his brothers and other family members live. They are all Afghan nationals.

The man said Taliban members had gone to his family home looking for his brothers, who worked for the international community. He said he and his brothers hid for several hours. He hopes Canada can also help his family escape and seek refuge.

“We are in a big chaotic situation. My siblings are in big trouble.”

He said Tuesday that Global Affairs told him there was still no update on evacuation plans and that he would have to complete the registration form for Canadians abroad, which who’s already done it.

The man said he heard rumors that the Taliban would start carrying out passport checks once US troops had fully withdrawn from Afghanistan, and that he was worried about his safety as a Canadian .

“The longer I wait, the more stable they are [the Taliban] are,” he said.

“The more stable they are, the more danger there is for me.”

2021-08-17
Previous Post: Obtaining Canadian citizenship by the birth of a child
Next Post: Canadian Afghans stranded in Kabul ask Canadian government for help