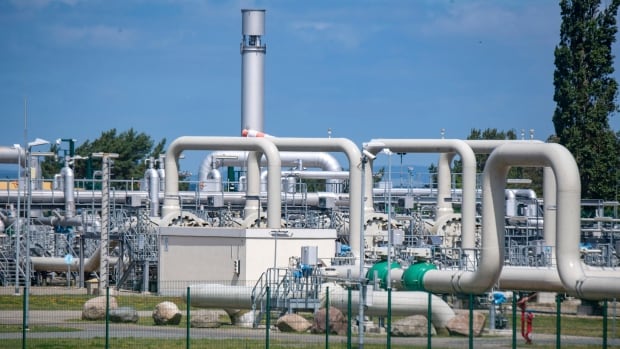 A group representing the Ukrainian diaspora in Canada said on Tuesday it was seeking judicial review of the federal government’s decision to return repaired turbines needed for the Nord Stream 1 gas pipeline to Germany.

The Canadian government said on Saturday it was issuing a “time-limited and revocable permit” to exempt the return of turbines from its Russian sanctions as Europe seeks continued energy flows until it can end its dependence on Russian gas.

Ukraine’s energy and foreign ministries said on Sunday the decision amounted to adjusting sanctions on Moscow “to Russia’s whims” and called for its reversal.

Last month, Russia cited the delayed return of turbines, which German firm Siemens Energy maintains in Canada, as the reason for reducing flows to 40% of capacity through the Nord Stream 1 pipeline between Russia and Germany.

“This exemption from the sanctions regime against Russia is completely unacceptable,” the Ukrainian World Congress said in a statement. “There are real alternatives to Germany’s gas needs, including buying through the Ukrainian gas pipeline.”

Ukraine’s World Congress said it had filed a notice of application for judicial review with the Federal Court and seeks “a declaration that the decision to provide a permit to Siemens was unreasonable and unauthorized and an order rescinding the permit.” .

The Department of National Defense did not immediately respond to an email request for comment from Reuters.

“This is a very dangerous precedent,” Ukrainian Ambassador Yulia Kovaliv said of the Canadian government’s decision to return Russian turbines to Germany. “The Russians are just blackmailing Europe.”

Ukraine is receiving an additional $1.7 billion in aid from the US government and the World Bank to pay the salaries of its beleaguered healthcare workers and provide other essential services.

The money coming Tuesday from the U.S. Agency for International Development, the Treasury Department and the World Bank is intended to ease the acute budget deficit caused by Russian President Vladimir Putin’s “brutal war of aggression”, said USAID in a statement.

While many medical personnel have left Ukraine, some hospitals have closed and others have been bombed. The health workers who remain in Ukraine are doing their job in difficult conditions.

“$1.7 billion is not just another financial backer; it’s an investment that brings us closer to victory,” Liashko said in a statement.

Reaction of the Ukrainian Prime Minister:

$1.7 billion in grants were paid to the Ukrainian budget from the Trust Fund of the @WorldBank and @USAID. This is the second US grant in the past two weeks, the total amount of aid is $3 billion. Grateful to 🇺🇸 & @POTUS for incredible support.

To date, USAID has provided $4 billion in budget support to the Ukrainian government. These funds were used to ensure the delivery of gas and electricity to hospitals and schools, provide humanitarian supplies to citizens and pay the salaries of civil servants and teachers, the organization said.

Overall, the United States has sent about $7.3 billion in aid to Ukraine since the war began in late February.

Ukraine may use new weapons

Meanwhile, Ukrainian authorities said on Tuesday their forces targeted a Russian ammunition depot in the south of the country overnight, resulting in a massive explosion captured on social media.

The accuracy of the strike suggested Ukrainian forces used US-supplied High Mobility Multiple Launch Artillery Rocket Systems, or HIMARS, to strike the area. Ukraine has indicated in recent days that it may launch a counter-offensive to reclaim territory in the south of the country as Russia devotes resources to capturing the entire eastern region of Donbass.

Russian news agency Tass offered a different account of the Nova Kakhovka explosion, saying a mineral fertilizer storage facility had exploded and a market, hospital and homes were damaged during the explosion. struck. Some of the fertilizer ingredients can be used for ammo.

A satellite photo taken Tuesday and analyzed by The Associated Press showed extensive damage. A massive crater stood precisely where a large warehouse-like structure once stood in the city,

Ukraine now has eight of the HIMAR systems, a high-precision truck-mounted missile launcher, and Washington has promised to send four more.

Elsewhere in Ukraine, Russian shelling over the past 24 hours has killed at least 16 civilians and injured 48 others, Ukraine’s presidential office said in its Tuesday morning update. Towns and villages in five southeastern regions came under Russian fire, the office said.

Nine civilians were killed and two others injured in Donetsk province, which represents half of Donbass. Russian rocket fire targeted the cities of Sloviansk and Toretsk, where a kindergarten was hit, the presidential office said.

The British Ministry of Defense briefing said Russia had seized the Ukrainian town of Hryhorivka and was continuing to push towards the provincial towns of Donetsk, Kramatorsk and Sloviansk.

“Russian forces are likely to maintain military pressure on Ukrainian forces while regrouping and reconstituting for further offensives in the near future,” the intelligence briefing said.

Putin to visit Iran over US weapons warning

Putin will visit Iran next week, the Kremlin announced on Tuesday, a day after the United States warned that Tehran could provide Moscow with drones for its action in Ukraine.

On a trip to Tehran next Tuesday, Putin will take part in a trilateral meeting with Iranian and Turkish leaders, the so-called Astana format of meetings for Syria-related talks, Kremlin spokesman Dmitry Peskov said. .

Putin’s visit to Iran will follow US President Joe Biden’s trip to Israel and Saudi Arabia this week, where Iran’s nuclear program and malign activities in the region will be a key talking point.

The White House said Monday it believes Russia is looking to Iran to provide it with “hundreds” of drones, including those capable of carrying weapons, for use in Ukraine.

US National Security Adviser Jake Sullivan said it was unclear if Iran had already supplied any of the vehicles to Russia, but said the United States had “information indicating that Iran was preparing to train Russian forces to use them as early as this month.

Iranian Foreign Minister’s spokesman Nasser Kanaani did not deny the US claim in comments on Tuesday.